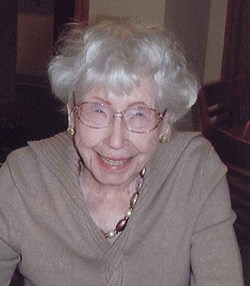 Ruth Volbrecht, age 98 of Madison, formerly of Montello, entered her heavenly home peacefully on Saturday, May 18, 2013 at the VA Hospital in Madison. She was the daughter of Ross and Sadie Gaylord, born in the Town of Marion, Waushara County on March 9, 1915. Ruth attended schools in Wautoma and Stevens Point College. After her schooling she taught school in Waushara County for nine years. During WW II she served as a WAC from 1943 -1946 at Stewart Field, NY. On April 20, 1946 Ruth married Melvin Volbrecht of Montello and they lived and farmed in the Town of Packwaukee until they retired in 1994. Following their retirement they moved to Cottage Grove. After Mel’s passing Ruth moved to Westminster Independent Living in Madison where she was residing. Her interests were many including Trinity Ladies Aid and church projects, gardening, flowers, crafts, cooking and baking.

“Be not sorrowful that I am gone
and my earthly life is done. Be
not sad I passed away, for in you,
I live each day. I have lived a full
and fruitful life. So do not mourn,
and do not weep, for I have
earned this peaceful sleep.”


Please take a moment to view the online guestbook. Send your condolences or share a memory of Ruth with her family.

To order memorial trees or send flowers to the family in memory of Ruth Volbrecht, please visit our flower store.