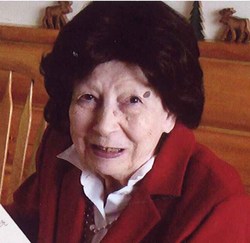 Ruth Veann Wright, age 85 of Stevens Point, formerly of Westfield, passed away on Thursday, December 12, 2013 at North Ridge Assisted Living Center in Stevens Point. She was born on May 30, 1928 in Westfield to Henry and Clara (Tagatz) Kromrie.

Ruth, a homemaker, was also employed at Campbell’s Department Store and Sentry Insurance before retiring to Westfield with her loving husband of 44 years, Donald. They enjoyed many years together there until his death in 1997. She later returned to Stevens Point to be closer to her family.
Ruth was a member of the American Legion Ladies Auxiliary and loved daily visits with her son, cats and sewing.

She is survived by her son, David (Judy) Wright; three grandchildren, Amy (Paul) Modrzewski, Angie and Amanda Wright; one great grandchild, Aaron Modrzewski; other relatives and friends. She was preceded in death by her parents; husband; two brothers, Donald and Harry and one sister, Margaret Little.

Please take a moment to view the online guestbook. Send your condolences or share a memory of Ruth with her family.

To order memorial trees or send flowers to the family in memory of Ruth Wright, please visit our flower store.