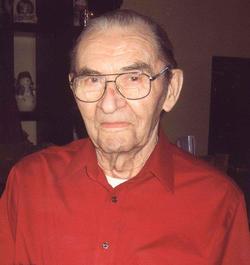 Vincent H. Krueger, age 94 of Westfield, passed away on Monday, April 15, 2013 at his home. He was born on August 8, 1918 in the Town of Newton, son of the late Julius and Emma (Hebbe) Krueger. Vince was baptized and confirmed at St. Paul Ev. Lutheran Church, Newton. He married Elenora Stelter on September 1, 1945 at Little Mecan Church. Vince farmed on the family homestead in the Town of Newton for his entire life where he grew cucumbers and other crops, milked cows and raised bulls. He enjoyed traveling and dancing with his wife, deer hunting and spending time with his family. Vince was a member of Immanuel Lutheran Church, Westfield.

A funeral service for Vince will be held on Monday, April 22, 2013 at 11:00 a.m. at Immanuel Lutheran Church, Westfield with Rev. Gary H. Schultz officiating. Burial will be in Westfield East Cemetery. A visitation will be held on Sunday, April 21, 2013 from 4:00 to 7:00 p.m. at Steinhaus-Holly Funeral Home, Westfield and on Monday from 10:00 a.m. until the hour of service at the church.


Please take a moment to view the online guestbook. Send your condolences or share a memory of Vince with the family.

To order memorial trees or send flowers to the family in memory of Vincent Krueger, please visit our flower store.