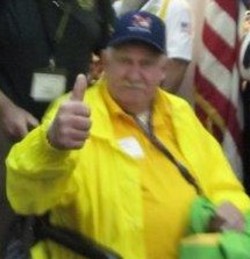 Mick served in the US Navy aboard the aircraft carrier USS Wright as a gunners mate during WWII. One of his fondest memories was traveling to view the WWII memorial on the honor flight in 2012.

An avid sportsman, Mick enjoyed hunting, fishing and just about anything to do with the outdoors. Planting trees of every variety was a spring ritual, followed by the annual Turkey season and a transition to gardening. He enjoyed “The Ponderosa” where he was known to raise a few fish, ducks and geese. Watching the spring nesting of wood ducks from his “spot at the table” was a real pleasure.

Well known for his kindness and generosity to others, Mick was always available to help. In his travels throughout the county he had been known to attend a few farm auctions where he always stood in the background and you were greeted with a smile and he left with a boxful of treasures. Each spring, Mick looked forward to attending the Harrisville Sportsman’s Banquet where stories were shared with family and friends.

An extraordinary deer hunter, he participated in the very first deer hunt in Marquette County and every season since. An avid trapper he could be found each fall in his boat on Buffalo Lake tending the trap line or in the pursuit of ducks or geese. Whether planting, hunting or fishing he always had his own way of doing things and eventually, through trial and error you learned his way was the right way. It was a true pleasure to have known him and an even greater pleasure to call him dad.


Please take a moment to view the online guestbook. Send your condolences or share a memory of Mick with his family & friends.

To order memorial trees or send flowers to the family in memory of Walter Walters, please visit our flower store.