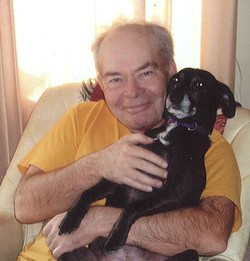 
William “BIll” Robert Carey, age 71, of Westfield, WI, formerly of Oswego, IL, passed away peacefully on August 22, 2013, at Ministries of St Joseph Medical Center in Marshfield, WI. He was born on April 16, 1942 in Joliet, IL to Robert and Mary (Rogers) Carey. Bill graduated from Joliet Catholic High School in 1960 and went on to work for Western Electric in Aurora, IL and retired after 24 years. After retirement, Bill’s love for the outdoors led him to work for the Oswego, IL Park District, where he earned a second retirement after 8 years. Bill then decided it was time to retire to his home in Westfield, WI.

During his time at Western Electric, a good friend set up a blind date, which led him to fall in love with Kathryn Piper. After a short time dating, the two were married on July 12, 1975. The two spent the next 38 years together enjoying life. They traveled, golfed, raised 7 children, spoiled 18 grandchildren, and spent time relaxing in Westfield with their 3 dogs. Bill also had a passion for football. He had a direct hand in organizing the Oswego Youth Tackle Football league in 1980. He also rooted for his Green Bay Packers every Sunday.

A Mass of Christian Burial for Bill will be held on Monday, August 26, 2013 at 2:00 p.m. at Good Shepherd Catholic Church in Westfield with Monsignor John Hebl officiating. Burial will be in Riverside “Lawrence” Cemetery, Town of Westfield. A visitation will be held on Sunday, August 25, 2013 from 4:00 to 7:00 p.m. at Steinhaus-Holly Funeral Home, Westfield and on Monday from 1:00 p.m. until the hour of service at the church.


Please take a moment to view the online guestbook. Send your condolences or share a memory of Bill with his family.

To order memorial trees or send flowers to the family in memory of William Carey, please visit our flower store.