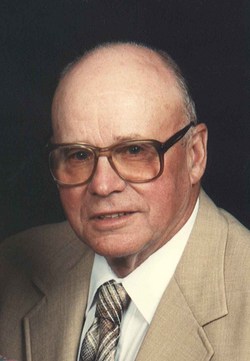 William G. Procknow, age 94 of Madison/Oxford. A loving husband, wonderful father and grandfather and a friend to all that knew him passed away on January 3rd, 2011. William Gustav Procknow was born August 20, 1916 on a farm in Adams County to Edwin and Edna Procknow, the oldest of four children. After serving his country as a company commander in the 96th Infantry Division in the Philippines and Okinawa during WWII, he came home and married Margaret Dunn, the love of his life, on August 11, 1947. He and Margaret raised two daughters, Linda Ripley and Nancy Natzke.

Bill was always active in church and civic affairs in his hometown of Oxford, where he graduated from high school in 1934. He was a lifelong member of the First Presbyterian Church in Oxford, serving as the church treasurer and as an elder of the session. He served as a Trustee for the village and as a volunteer member of the fire department. Bill was also active in the Oxford Lions Club and the local VFW. From the time he was thirteen until into his fifties he played on several local baseball teams. Later in life he bowled and played golf on a regular basis. His hobby was woodworking and there are countless pieces of beautiful furniture that he crafted in his shop for friends and members of his family that will be treasured for generations to come.

Early in life he made a living by driving a delivery truck for Mitchell’s Grocery, later a milk truck for the local dairy. For the final several decades of his career he was a rural mail carrier for the Oxford Post Office.

Preceding him in death were his parents, his brother Lloyd, his sister Kathryn Jonikas and her husband Anthony, and his brother-in-law Jay Morgan. Surviving him are his wife Margaret, his brother Robert (Donna) of Wisconsin Dells, his sister-in-law Shirley Procknow of Oxford, his sister-in-law Lucille Morgan of Douglas, Wy., his daughters Linda of Madison and Nancy (George) of Lodi, three grandchildren, Paula (Curt) Kodl, Stacy (Paul) Kemnitzer and Mitchell Ripley and four great grandchildren. He is further survived by several nieces, nephews and cousins.

Bill and Margaret enjoyed a 63 year marriage that was built on a foundation of love for each other and for their family that was displayed each and every day and continued to the very end.

To order memorial trees or send flowers to the family in memory of William Procknow, please visit our flower store.