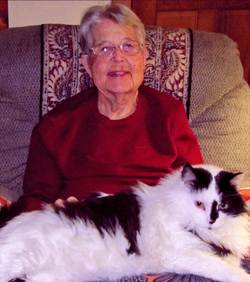 Willo Tessmer, of the Township of Harris, passed away on Saturday, January 29, 2011 at Harris Villa at the age of 92. She was born on June 4, 1918 in Tippecanoe (now a part of Milwaukee) to Bertha (Marquardt) and Samuel Rothwell. She was a graduate of Bayview High School and earned a Bachelor of Science degree from Milwaukee State Teacher’s College (now UW-Milwaukee). She later received a Master’s of Science degree from UW-Platteville.

She married Alvin Tessmer. They had two sons, Thomas and Bruce. She was devoted to her three guys. The family shared a love of nature, history, and reading. They enjoyed traveling, camping, canoeing, and riding their motorcycles. Alvin and Willo were enthusiastic about making home improvements, doing most of the work themselves.

Willo loved her country and enlisted in the Army Air Force during World War II. She was proud to have been one of the World War II veterans on the Old Glory Honor Flight to Washington, D.C. on June 1, 2010.

Willo was a gifted teacher. She taught in several small rural eight-graded schools, at Sheboygan County Teacher’s College for 14 years, and retired from Lincoln Erdman School in the Sheboygan School District in 1981.

After retiring with Alvin to Harris Township in 1982, Willo became active in various community organizations. She was a member of the American Legion, serving as Chaplain, Adjutant, and a member of the Honor Guard for many years. She was an active member of the Trinity United Methodist Church. She helped with the Marquette County Care and Share and provided entertainment at the Senior Meal Site.

Willo was a prolific and creative seamstress, quilter, and knitter. She played guitar, sang, and composed songs and poetry. She loved to bake pies and make rich sweet desserts. She shared her many talents with others. She was a woman of strong character who lived through tough times with the determination to succeed in life on her terms.

Willo is survived by her two sons, Thomas (Rosemary) of Green Bay and Bruce (Mary Lou) of Richland Center; four grandchildren, Jennifer Stuiber, Chris (Heidi), Eric, and Melanie Tessmer; one great granddaughter, Sierra Stuiber; her beloved cat, Barney; nieces and nephews, and other relatives and dear friends. She was preceded in death by her husband, Alvin, in 2005; her parents; three brothers, Rocky (Mae), Robert (Sophie), and Benny; and one sister, May (Edwin Rosin).

A memorial service for Willo will be held on Friday, February 11, 2011 at 11:30 AM at Trinity United Methodist Church in Montello with Rev. Sue Bryce officiating. The American Legion will conduct military honors following the service. Inurnment will be in Rock Springs Cemetery, Sauk County, at a later date. Visitation will be held at the church from 10:00 AM until the time of the service. In lieu of flowers memorials are appreciated to American Heart Association or Wisconsin Veterans Home at King.

To order memorial trees or send flowers to the family in memory of Willo Tessmer, please visit our flower store.