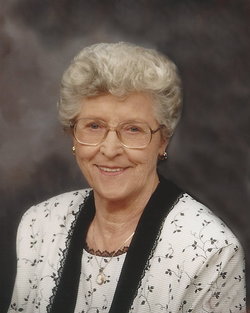 Wilma Marie (Housel) Robinson, age 89 of Montello, passed away peacefully surrounded by her family on Tuesday, March 12, 2013 at Joanie’s Home in Montello. She was born on April 9, 1923 at Lewistown, Montana to Oliver and Cecil (Heath) Housel of Heath, Montana

She was raised in Montana until the family moved to Bremerton, WA. There she met Robert, who was serving in the U.S. Navy. She married him, after thirteen days of courtship, on January 16, 1942. She was a Navy wife until 1946. In 1947 after Bob completed his Navy service, the family moved to Montello.

Wilma wanted to be a stay-at-home mom until her youngest child Sam, was in grade school. In 1965 she went to work as secretary for Montello Schools in Title I Reading Program. Later she transferred to the Montello High School office as secretary. She enjoyed being in the company of all the students and teachers, as everyday was different and a challenge.

In 1970, Bob suggested that Wilma join him in the Marquette County Clerk of Courts office. She then served as his Deputy Clerk of Courts for fourteen years. During that time she was a member of the Montello School Board.

She and Bob retired in 1984 from the Marquette County Clerk of Courts office.

Wilma was a member of the Trinity United Methodist Church in Montello. In years past she served on various committees in the church as well as with the Women's Society of Christian Service, now called the United Methodist Women. She was the Sunday school pianist and a teacher. She enjoyed singing in the choir. She especially looked forward to the preparing and helping serve the annual Harvest Supper, and in earlier years, the Methodist Men's Club monthly dinners. When the church was across the street from her home, she prepared the communion elements, laundering the cloths and altar linens plus planting the outside flowers. She opened her home to visiting ministers when they needed a place to stay. For twenty-five years she helped decorate the Christmas tree with Chrismons that she had helped make.

In retirement she traveled to Washington and Montana to visit relatives. Wilma deeply loved her memories of Montana and shared them with anyone who would listen.

Along with her husband Bob they enjoyed the company of their best friends, Herb and Lil Sheller. They vacationed together, went out to eat, went antiquing and enjoyed rides in the country.

She enjoyed family gatherings and bringing food that only she could make, especially, her potato salad and pickles. She loved being outdoors, whether by a campfire or helping pick apples at Hamilton's Farm.

In wintertime she enjoyed doing genealogy and organizing family pictures and scrapbooks.

Her greatest joy was her flower gardens. She looked forward to every spring. She cared for her flowers like her family, very lovingly.

The most important thing in her life was her family. She would do anything that was possible for them. She loved just being in her home. She would always volunteer for whatever her family needed. She once baked cookies for her son's drum and bugle corp so they would feel more at home while competing around the country. She made coffee and sandwiches at 2a.m. because of a huge fire in town, while her son was the Montello Fire Chief, because the firemen were all cold and tired. Whenever a babysitter was needed, Grandma Wilma was there.

Wilma was very proud of her children and grandchildren and enjoyed watching them participate in 4H and school activities including football, basketball, grade school and high school band and chorus.

She was a member of the following: Order Eastern Star, Montello; Daughters of the Nile, Madison; White Shrine of Jerusalem, Tacoma, WA; and American Legion Auxiliary, Montello.

Wilma is survived by her sons, Mark (Shelley), Montello; Sam (Diane), Waunakee; daughters, Sheryl Robinson, Wisconsin Dells; Teresa (Tom) Lyon, Westfield; eleven grandchildren, 22 great-grandchildren and one niece, Linda Carver. She is further survived by other relatives and friends. In addition to her parents, she was preceded in death by her husband, Robert and brother, Kenneth.

A memorial service for Wilma will be held on Wednesday, March 20, 2013 at 3:00 p.m. at Trinity United Methodist Church, Montello with Rev. Dawn Helton-Anishinaabeqwa officiating. A private inurnment will be held at Oak Hill Cemetery, Town of Westfield at a later date. A memorial visitation will be held on Wednesday from 1:00 p.m. until the hour of service at the church. Memorials would be appreciated to Budda Box Fight Against Cancer of Marquette County or Shriners Hospitals for Children.


Please take a moment to view the online guestbook. Send your condolences or share a memory of Wilma with her family.

To order memorial trees or send flowers to the family in memory of Wilma Robinson, please visit our flower store.